Thanks to ZYYX for this awesome prize, thanks to Pinshape and jury and thanks to Daniel Noree for the original design, it was great as all his designs!

Well, that was a couple of weeks ago but, thanks to ZYYX and Pinshape, I have just received my prize: a brand new ZYYX+ 3D printer and a limited polo T-shirt!!!

I’m so excited because I owned a Prusa i3 hephestos and, even that it performs very well, I was starting to think that I would like to try something more robust and estable. I will write about it in a few days.

But first, I had to make room for the ZYYX+. My workshop is very space limited and I had to come up with a solution to make room for two printers. So, before receiving it, I bought a famous IKEA LACK table and 4 ADILS table legs. I also used some LACK spare parts from old tables. I had to make holes under one of the LACK table-top and use M8 screws to attach one table to another. M8 screws fit perfectly into ADILS legs.

With that, I was able to build the 3D tower (as I call it). It has three shelves, two for the printers, and a third small one on the bottom to store some hardware and cables. I also added led strips for illumination (work in progress as I have to add a support for the switch). Moreover, I added wheels to let me access the back of the printers without a hassle!

You can see the result in the pictures, what do you think? 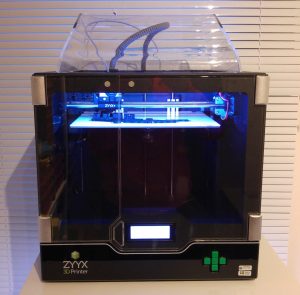